Where the mortgage deduction really pays


The mortgage interest deduction is one of the most-expensive tax breaks on the books, but its benefits are distributed unevenly across the country, according to a new, comprehensive report by the Pew Charitable Trusts.

In 2010, the year that Pew analyzed, the mortgage deduction resulted in $80 billion of forgone revenue to the federal government. Over five years, the tax break is expected to reduce revenue by about $380 billion.
This article by Jeanne Sahadi @CNNMoney shows however who really benefits from the tax break (and who benefits from other tax breaks),  while these report and maps look at the geographical distribution of the mortgage interest deduction.

Local info:
Look at the average deduction per household in your local area.

Thanks for reading,
Francis

As seen on Thursday's front page of the San Jose Mercury News (and also in the SF Chronicle of today Friday), property values in the Bay Area as a whole are definitely picking up.  Typically when it gets in the paper, it is already a few months old, but the information is organized in a way that shows updates in some communities that are not obviously visible to us here in the Silicon Valley.

The article is also interesting because it touches on a subject I touched on earlier in this blog: why are there so few homes on the market?   They are showing that there are still a lot of houses either underwater, or with not enough equity for people to move:
according to Zillow there are still about 25% of homeowners who are in that situation in the Counties of Santa Clara and San Mateo, and a whopping 46% in the Contra Costa County.

That would include:
- people who bought when prices were higher,
- people who borrowed too much on their home equity over the years,
- prices that are slightly higher than when property was purchased, but would not break even with the costs of the sale.

Posted by Francis at 4:12 PM No comments:

Despite US population growth of roughly 1 percent per year, the number of owner households has held steady, in the range of 75 million since 2007, while the number of renter households has increased from 35 million in 2007 to nearly 40 million today.
This means that the historic proportion of 1/3 - 2/3 tenants - owners in the US is loosing ground.

Some of the reasons are:
- loss of home because of the crisis,
- difficulty to refinance,
- Some renters who would like to take advantage of today's favorable prices and interest rates are finding credit standards too tight to obtain financing.

Here is the evolution over time, nationwide: 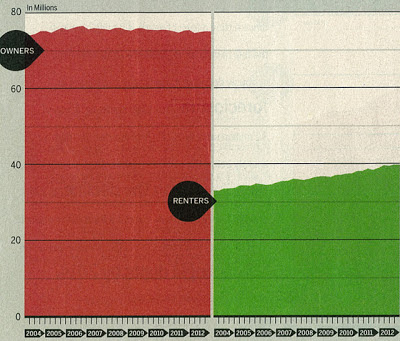 PS: in California, the homeownership rate has gone down regularly since 2008 and is now about 54%.

Non-profit organization worth noting: Partners for New Generations.
Posted by Francis at 6:02 PM No comments:

California, the most popular State for immigrants...  When I came here first in 1970 the mentality was still very much like: "Go West, young man, go West" and a lot of people were arriving from the East to start anew.  There was a lot of space available, still, right outside your door.
What is the situation now?

Well, it is true that historically, California has been the popular destination for immigrants. Currently, about one quarter of the nation’s immigrants live in California. The top three countries of origin for the foreign born entering the U.S are Mexico, China and India.
However, California’s share of incoming immigrants has been declining since 1990 due to a rise in state bills related to immigration, and the settlements of new immigrant arrivals into different states with historically low concentrations of immigrants.
Length of stay and region of origin are significant factors in determining homeownership rate among international buyers. Those who have stayed longer, and have migrated from Europe and other parts of North America are more likely to own a home.
Homeownership rate among the foreign born population is 47.9 percent in California, much less than the rate among those born in the U.S (58.1 percent). When breaking down the foreign born population, naturalized citizens are twice as likely to own a home compare to those who are not (63 percent for naturalized citizens versus 28 percent who are not a U.S citizen).
One in five REALTORS® has worked with an international buyer in the past year.
The share of international buyers has slightly increased from 5.3 percent in 2010 to 5.8 percent in 2011.
In 2012, California accounted for 11 percent of home purchases by international clients, second behind Florida (26 percent).

The largest group of international clients in California is from Canada.
The median home price of foreign clients was $505,000, which is double the median price of single family homes in the state ($291,000)
The California Association of Realtors has published a new study on the subject.
Full study url:   http://www.car.org/3550/pdf/econpdfs/BusinessDataForInternationalRE_Final.pdf
Thanks for reading,
Francis
Silicon Valley Real Estate

Reasons your neighbors hate you...

Well...  a little bit of humor mixed with some sound advice and remarks.. From Lucy O'Neill at the Improvement Center.

9 reasons neighbors hate you
Courtesy of: ImprovementCenter.com
Posted by Francis at 12:40 PM No comments: