The suspension will apply only to eviction lockouts related to Freddie Ma and Fannie Mae owned REO properties and will not affect other pre- or post-foreclosure processes. During this period, legal and administrative proceedings for evictions may continue, but families living in foreclosed properties will be permitted to remain in the home.

To keep in perspective: a lot is being said in the press about real estate in the Bay Area, including a lot of foreclosures and short sales happening all the time. But really, when you add all properties combined, (houses and condominiums, townhouses, PUD’s etc…), what really happened to the market in our area in the past 3 years? I think simple graphs can help us understand how we fare here in the Silicon Valley. In the Counties of San Mateo & Santa Clara, let us look at a simple measure: the average sales price:

Individual Cities can be very different. For instance Palo Alto has the following history in the same 3 years, showing here in blue the average time to sell a home: 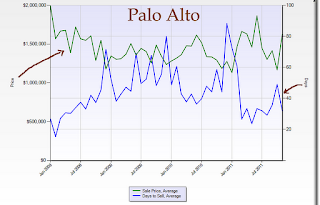 the variations in sales prices are not as steep as the averages in the County.

Let me know and I will prepare a study of your own City/ neighborhood.
Thanks for reading !
Francis

Mortgage rates
Posted by Francis at 7:52 PM No comments:

On the local political front, a little note on Sunnyvale...

As part of the development of Sunnyvale's Climate Action Plan, the city is considering prohibiting the sale of property until an energy and water efficiency inspection is completed for owner occupied homes and energy efficiency retrofits are made to commercial property. The proposals were discussed as part of a city council study session this week.

SILVAR opposes this proposal because of the detrimental impact it will have on property owners and the ability to close transactions in Sunnyvale. Also, because the mandates would only impact properties at the time of sale, it would take decades before it would impact a significant amount of the housing stock.

SILVAR presented written testimony in opposition to the proposed mandate to the council, and SILVAR Past President Mark Burns had previously spoken at a meeting and asked the council to remove the recommendation from the draft report.

None of the council members spoke in favor of keeping the time of sale mandate in the draft. Council Member Chris Moylan made a strong statement in opposition to the recommendation. The draft climate action plan will be out for public comment and review over the next several months, so stay tuned for updates.
Thanks for reading.
Francis

Mortgage rates
Posted by Francis at 5:45 PM No comments:

The Marriage of Weddings and Real Estate...

Many couples about to tie the knot are doing a different type of wedding registry nowadays, one that allows them to collect cash for a down payment on a home, according to a recent article in The Washington Times.

Dana Ostomel, founder of Deposit a Gift in New York City, says that about 15 % of their registries are to raise down-payment funds for a home and another 15 % are for home-improvement funds to pay for upgrades like a new roof or furniture. "Given that 75 % of today’s engaged couples already live together and are older, very often they are already established with the household basics that you find on a traditional registry," Ostomel said. "What they want is the gift of big-ticket items and longer term goals, like the gift of home ownership.”

The FHA permits gifts from a wedding to be used as a down payment, but lenders are required to document that the funds are gifts. About 27 % of first-time home buyers use gift money from relatives and friends for a down payment, according to a 2010 National Association of REALTORS® Profile of Home Buyers and Sellers survey. Source: The Washington Times

Mortgage rates
Posted by Francis at 5:28 PM No comments: