Home prices going forward in the US... & Bay Area

US house prices are going to rise at twice the speed of inflation and pay: Reuters poll
Source: CNBC Article

An acute shortage of affordable homes in the United States will continue over the coming year, according to a majority of property market analysts polled by Reuters, driving prices up faster than inflation and wage growth.

The latest poll of nearly 45 analysts taken May 16-June 5 showed the S&P/Case Shiller composite index of home prices in 20 cities is expected to gain a further 5.7 percent this year.
That compared to predictions for average earnings growth of 2.8 percent and inflation of 2.5 percent 2018, according to a separate Reuters poll of economists.

A further breakdown of the April data showed the inventory of existing homes had declined for 35 straight months on an annual basis while the median house price was up for a 74th consecutive month.

About 80 percent of nearly 40 analysts who answered an extra question said the already tight supply of affordable homes in the United States will either stay the same or fall over the next 12 months.

In the Bay Area, things are not better.  The ratio of home completions to job growth is still very small, which will keep pressure on home prices here too: 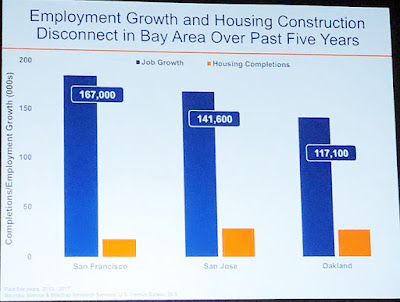 .. while according to this article from the Mercury News, the nation's top three most expensive places for renters are here in the Bay Area...

Thank you for reading,

According to a new report by Veritas Urbis Economics, the landscape of buyers is changing in surprising ways as compared to  35 years ago.

According to this Housing Wire article by Kelsey Ramirez:

How does it play out in the Bay Area of San Francisco, the Silicon Valley?
I don't think we fall within those stats very well when it comes to age.  In my (limited) experience, in the local market, there are quite a few younger households among the buyers, and as far as households over 55, they make up a lot of the sellers, not buyers: as people age, they are likely to sell their home at some point, and in that case they most often leave the area.  Typically this demographic segment does not buy in the Valley as prices and property taxes are too high for the retired population.  Although we do have a portion of the elderly buyers who are moving down, after selling a property that has become too large or far away for them.

Thank you for reading,