Some advice to home buyers.

Some advice to home buyers:


There is plenty of advice around, available to new homebuyers, - no shortage of good words, must-do's, encouragements, explanations and training, etc...  I do not mean to be comprehensive in this blog, but I just wanted to say a few things coming to mind, in light of what is going on out there: the current local market, fast-going environment, competitive to the extreme, sometimes ruthless.


Taking a bit of perspective, I just wanted to throw some ideas out there and remind of some basic main ideas:


As always, thank you so much for reading, and if you like what you read, let your friends know!
Francis
Silicon Valley real estate specialist
Detailed, local trends etc...
Current mortgage rates
Posted by Francis at 9:08 PM No comments:

Offers over asking price in California.

To keep in perspective:

How many houses sell for over their asking price throughout California, over time?  This may answer your questions on this matter: 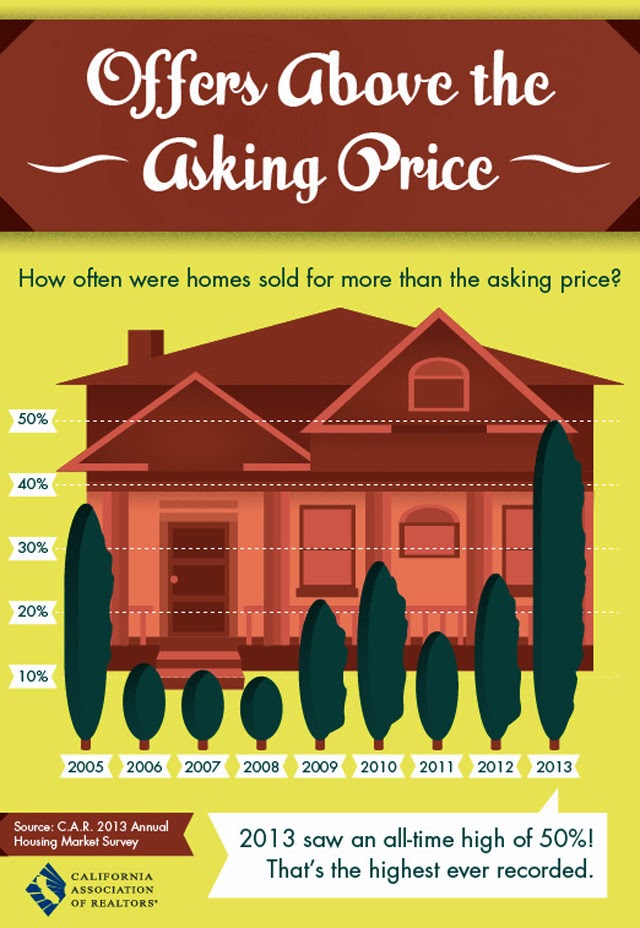 Posted by Francis at 5:00 PM No comments:


It is no secret that finding a place to call home in the Bay Area has become a problem, both as a purchase and as a rental.  Rents have gone up very significantly in the past 3 to 4 years, with a steep acceleration as early as mid 2012.  The front page of the San Jose Mercury News today 4/16/14 talks about it and prints: " Region's average asking rent is now $2,043 after three years of double-digit annual growth".


But this is not limited at all to our area. Nationwide, there is a similar problem, as studied and explained in the Rental Housing Report of the Harvard’s Joint Center for Housing Studies (Dec. of 2013). In many ways, the situation has to give us pause.

Harvard's Joint Center for Housing Studies Article.
If you want a copy of the SJ Merc. article let me know.

non-profit organization worth noting: Partners for New Generations.
Posted by Francis at 11:11 PM No comments:

I recently sold a house for which a row of privacy trees was quite important, as a brand new development of apartments is slated to be built on the back side of the lot.


This “privacy screen” turned out to be quite useful in this case, as it will continue to grow and provide a clear separation between the new buyers’ home and the large complex in the back.


What kind of trees can you use to build such a protection, both from sight and from noise?  I thought that this page from the “fast-growing-trees.com” web site was quite informative, as well as their blog.


Do you have any local suggestions for any specific trees that work well here in the Bay Area?