One in Three adult Americans has no emergency savings.

According to this April 2014 article from HousingWire by Trey Garrison the housing industry will likely be impacted by the results of a new survey from NeighborWorks America, which serve as a stark reminder of affordability challenges. The survey found that almost 70 million working age Americans – about one-third – have no emergency savings. This highlights a primary problem facing potential homebuyers, as one in three homes are deemed unaffordable to the average buyer, and mortgage originations are reportedly at a 14-year low.

Even though this is a nationwide study, California is not immune to the phenomenon obviously, and affordability concerns are certainly increased in areas of high prices like the Bay Area. I believe it is important to reflect on it.
Thank you for reading,
Francis
Silicon Valley real estate
Trends: Local prices and graphs.
A noteworthy local non-profit event:  Coalition on Homelessness, SF

Wondering how home sellers handled multiple offers in California, in 2013?

I thought this was a good piece of information: 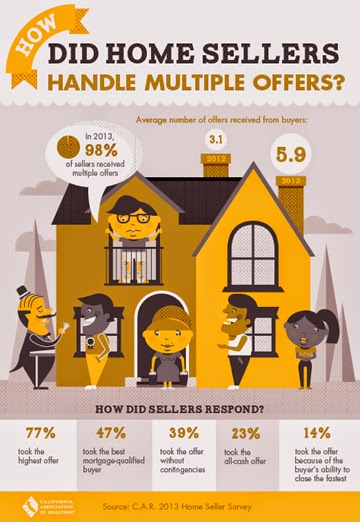 Thank you for reading,
Francis