Where can you find that home style?

Where can you find that style?

Great article I found recently about the various building styles in the US, and in which area/state you are more likely to find them.
The following map speaks quite well about the locations and the styles, but I find the article itself most interesting to read as it goes into the reasons why a style is more prevalent in a given state, and the usual value of the houses. 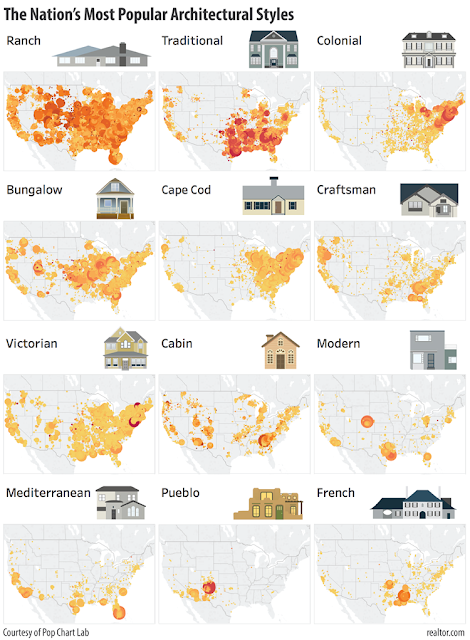 It comes to no surprise that the Mediterranean style is the most expensive, - it is often the case here too in the Silicon Valley, although I would add to this article that the “contemporary” home and the “modern” home are likely to be the most expensive where we are, as they are often associated with “new”, "recently build" and “high tech” or “smart home”.  This includes energy efficient.  Only the Eichlers might fit in that category of “contemporary” while not being necessarily new.

From an article in Realtor.com author by YuqingPan.

Thank you, as always, for reading, and let me know if you are thinking of buying or selling in 2017! ;-)
Francis

'tis the time of year: how did sales prices fare in the County of Santa Clara (Silicon Valley) for the past 2 years?  This blog looks at the price of houses only: Single Family Residences. 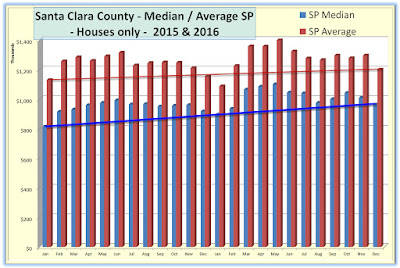 Something apparent in this kind of graph (which I publish regularly over the years) is the evolution over the course of the year: prices go up as a whole in general during the first 6 months of the year, and have a tendency to go down from there until the end of the year - with the exception of Sept. and October, when there is a regain in activity.

This is difficult to interpret completely: it does not mean necessarily that the value of a specific house will go down at that time, nor that it is not a good time to sell in November or December.  What it does mean instead is that statistically, more houses of a lower value sell during those periods, and this could be because of many reasons.
One of them, for instance, could be that people in a higher price range can wait for a "better" time to sell: the traditionally "active" real estate season of January to June.  It could be that more people "have" to sell at the end of the year;  more pressure means less room for negotiation.
What is also true though is that a beautiful remodeled home in a desirable neighborhood will probably not loose any value even at the end of the year, at least in our area of the US.

Finally, as a reminder that we always have to take graphs and statistics with a grain of salt, the same figures translate into the following:

This is a better representation of the market as we follow the market over the years:  from year to year, instead of from a given month to another given month.

To make sense of the evolution of prices in your own local area, or to price your home, do contact me.
Thank you for reading,
Francis


PS: Detailed info per County always available on my web site at:  www.frolland.com under the tab: "Local Info and Stats".

Posted by Francis at 6:43 PM No comments: